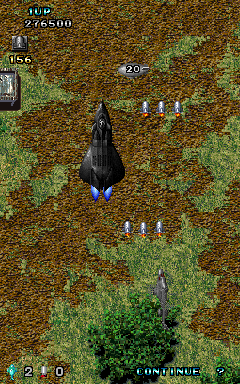 Twin Eagle is a vertically scrolling arcade style shooter. You control a helicopter, and need to earn points by shooting or bombing the various (and numerous!) enemies you'll encounter. Planes, helicopters, tanks, anti-aircraft guns, foot soldiers, and more will all be trying to bring your mission to an abrupt end! Occasionally, you may find hostages when a building is destroyed; try to rescue as many of the hostages as you can to earn extra points. Your helicopter has the ability to pick up extra weapons. After destroying certain enemies, a power up will be left behind which can give you one of four different types of firepower (the regular machine gun, canon, two way fire, or missiles). Other power ups that can be found include bombs (which can be used to destroy everything on the screen), extra speed, and weapon power up (increases the capabilities of whatever type of weapon you currently have).